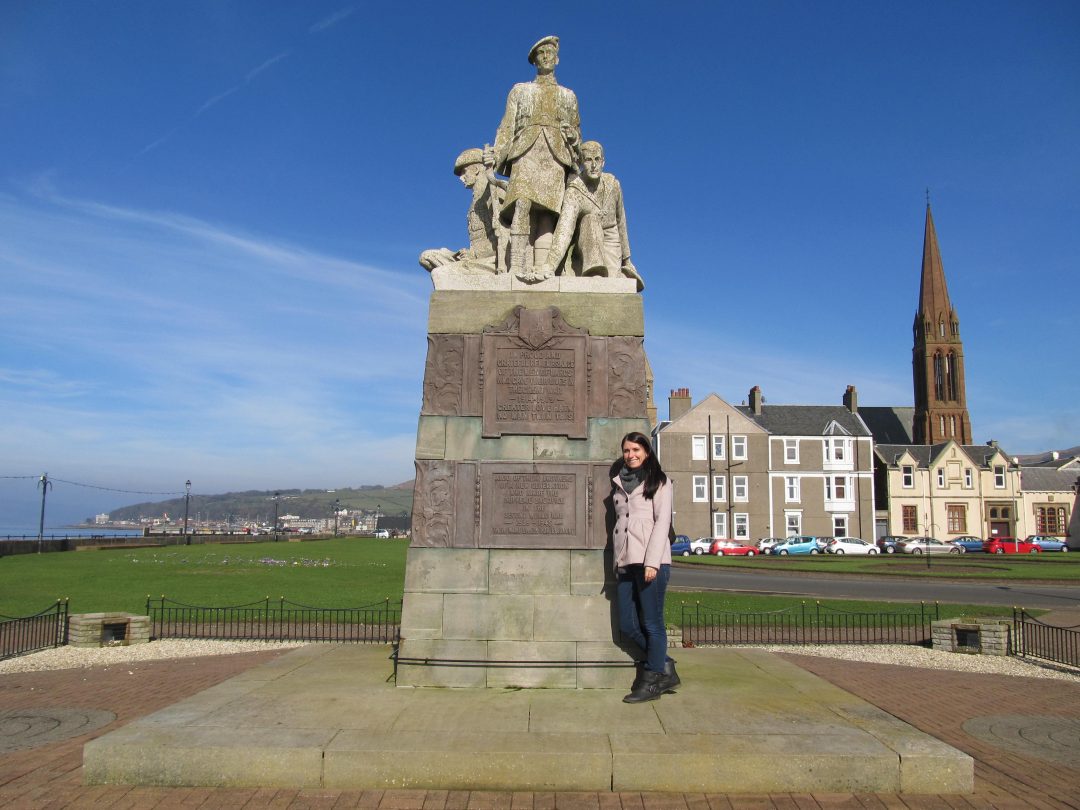 Last year, I had the opportunity to connect my roots in a way I never thought I would have the chance to. I grew up in Canada, hearing about my grandmother’s family from the seaside town of Largs, Scotland, and especially Robin. Robert Burns Campbell was my grandmother Jean’s older brother, who just after his 19th birthday, was presumed killed in action in the fields of Belgium in 1918. His body was never recovered, and his father Robert spent years trying to discover what happened to Robin, and where his final resting place was. His mother Marion, and sisters Maisie, Jean, and Joan could do nothing but grieve.

My mother kept a stack of Robin’s letters, written home to his family during his two years of training for the Machine Gun Corps. She passed them on to me, and I read each and every one. The letters were frequent, almost daily: he would describe his day and what he had learned, his surroundings, and his social life. Robin was proud of his uniform, and eager to do his part in the war. His stories made me smile, and cry. They made me proud to be part of his family, no day more than Remembrance Day. So, when I found myself living in Edinburgh, I knew I had to go to Largs.

My boyfriend Konstantin and I took a bus to Glasgow, then the train. We arrived in Largs on a sunny morning and walked the quaint streets. I looked for the antiques shop the Campbell family had owned on the main street, but the building was no longer there: a block flats stood in its place. We walked along the waterfront to the War Memorial, and found Private Robert B. Campbell’s name engraved on the side.

We headed towards John Street, to the house where my grandmother Jean and her family had lived. We had no number, and no photo or description of the house – all we had was the name: ‘Mossgiel’. I didn’t expect that to be much help: after all, decades had passed since the Campbells lived there. We found the street and started scouring each side, scrutinizing each home, each nameplate and gate. Then suddenly, he found it. I ran over to the gate, and there it was, in rusted lettering: ‘Mossgiel’. I ran my hands over it, and gazed at the stone house with the tidy backyard garden, imagining how it would have looked when Robin lived there.

From John Street, we walked towards the cemetery to find Robin’s memorial, erected to his memory though his
body doesn’t lie there. Walking though the gates, my heart sank. The cemetery was massive, with several sections and rows upon rows of memorial stones. All I had was the memory of a photograph I had once seen. But I was determined, and I began my search. We walked up the grassy hillside and I was struck by the stunning view of the ocean – it was a beautiful place.
After only a few minutes, I stopped in my tracks. I saw it: a pillar atop a mound of rocks, in front of a wooden fence. I knew it was his, and ran as hard as I could. I fell to my knees in front of the stone as I read the inscription, confirming what I already knew:
‘ROBIN
In Proud and Loving Memory of
Robert Burns Campbell,
Pte, Machine Gun Corps
Killed in Action At Voormezeele,
on 26th April, 1918
Aged 19 Years
Only Son of Robert & Marion Campbell’

I sat, and I cried. I realized Konstantin had stayed away so I could have this very personal moment to myself, and I was thankful. After a few moments, he joined me at the memorial, and we laid the bouquet of tulips I’d purchased on the way.

We stayed there for a while, absorbing our surroundings and the view, then decided it was time to go. Walking back along the shore, I felt a curious mix of emotions. Sadness for Robin and the young life that was lost, and that I had never met his sister, my grandmother Jean, who died before I was born. But I had connected with them, and with my family’s past. I had seen their town, their home, and the loving tributes to Robin’s sacrifice.